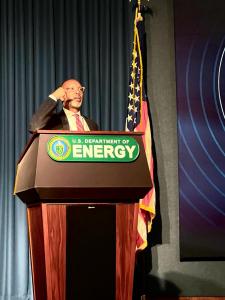 Ron Piece at the Department of Energy at EOPA Summit

What I care about deeply is trillion dollar scale”

WASHINGTON, D.C., UNITED STATES, August 19, 2022 /EINPresswire.com/ — At the Elected Officials to Protect America (EOPA) annual D.C. Climate Emergency & Energy Security Summit (the “Summit”), over 450 elected officials from across the country were briefed by the White House and The United States Department of Energy (DOE)— an executive department of the U.S. federal government that oversees U.S. national energy policy and manages the research and development in the United States.

The DOE will help implement the Inflation Reduction Act 2022 (IRA 2022) (the “IRA”), which was signed into law on Tuesday, August 16, 2022 which includes an investment of over $369 billion in energy security and climate change.

“Highlighting the potential public-private partnerships that are now possible with the Inflation Reduction Act 2022 was a critical component to our EOPA Summit at the DOE. The Bill and the partnerships it will build with local governments, NGOs and business will help millions of people as clean energy becomes more accessible. We’re extremely grateful to the White House for speaking at our Summit and Ron Pierce, U.S. DOE Director, Office of Small and Disadvantaged Business Utilization, and his team at the DOE for their informative presentations and hosting us.”

“Making sure state and local governments know about the climate benefits available is key. It’s our hope that the partnerships that will come from the Summit will mitigate the climate crisis while creating thousands of jobs. All the speakers highlighted exciting avenues forward that we can work together to build a clean energy equitable future.”

Jigar Shaw, the Director of the Loan Programs Office of the US Department of Energy notable for gaining prominence as an American clean energy entrepreneur, author, and thought leader for his work to create and advocate for market-driven solutions to climate change was another key-note at the Summit. Shaw set the stage when he remarked that what he deeply cares about “is trillion dollar scale.”

“Setting out strategies to mobilise private sector finance ahead of COP27 in Egypt are key, and the IRA 2022 sets an example on the global stage that celebrates one of greatest commercial opportunities of our time to unlock further capital.”

Previous to the Summit, EOPA held an invite-only closed press conference at The National Press Club and thanked Congressional leaders and President Biden for finalizing The Inflation Reduction Act (IRA) of 2022 — a critically important step for inflation, national security and the health of the planet.

“Making progress in this country, as big and complicated as ours, clearly, is not easy. It’s never been easy. But with unwavering conviction, commitment and patience, progress does come.” (Source)

Elected Officials to Protect America is a network of current and former elected officials who care deeply about protecting the planet and people. EOPA is committed to solving the climate crisis, ensuring environmental justice, and protecting our lands and waters. EOPA educates through value-based storytelling, training lawmakers, and connecting elected officials to inspire strong environmental leadership.

The Department of Energy (DoE) oversees energy-related research, domestic energy production and energy conservation. It is headed by the Secretary of Energy, who reports directly to President Biden and a member of his Cabinet. The current Secretary of Energy is Jennifer Granholm, who has served in the position since February 2021. The DoE is an executive department of the U.S. federal government that oversees U.S. national energy policy and manages the research and development in the United States.