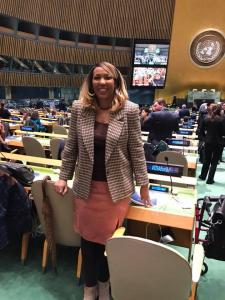 Impunity flourishes when we turn our heads away from such critically important, albeit troubling concerns.”

ATLANTA, GA, UNITED STATES, June 9, 2022 /EINPresswire.com/ — “Lambs that will not be sacrificed” is the title of a new book published on June 8, 2022, the thirtieth anniversary of America ratifying its International Covenant on Civil and Political Rights (ICCPR). Available in paperback through Amazon, the book description acknowledges “there are conflicting dates online as to the day America ratified its (ICCPR)”, but notes that former U.S. President Jimmy Carter identifies June 8, 1992 as the treaty’s ratification date. Among other things, the ICCPR mandates effective redress for human rights violations under color of law, i.e., committed by rogue agents of government. Former plaintiffs’ civil trial lawyer turned full-time human rights defender, Dr. Zena Crenshaw-Logal, contends it is “presently undisputed that America is and for decades has been violating that provision with regard to unethical judges, justices, and quasi-judicial officials.”

Crenshaw-Logal is co-founder and Executive Director of National Judicial Conduct and Disability Law Project, Inc. (NJCDLP), a grassroots nonprofit organization that in 2015 documented and in 2016 began publishing white papers on a national pattern of persistent U.S. legal system abuse facilitated by unchecked judicial misconduct. NJCDLP dubbed the phenomenon “The Third Degree” and equates it with weaponizations of America’s legal system against U.S. government critics, whistleblowers, political prisoners, and many other vulnerable populations including innocent children as well as senior citizens. “This is deliberate persecution tantamount to psychological torture in too many instances, directly victimizing millions of people in America on an intergenerational basis” says Crenshaw-Logal. “Lambs that will not be sacrificed” chronicles related domestic and international advocacy for individual relief and sweeping reforms of the U.S. legal system. It identifies and tackles as obstacles to effective redress what Crenshaw-Logal describes as “faux democracy” and tendencies of multilateralism to exalt form over substance.

Recognizing that controversy-adverse audiences may quickly shun her latest publication, Crenshaw-Logal made this statement:

“Until this book got published, I wondered why time after time, major media news outlets would bombard airwaves and cyberspace with variations of the same sensational story. As the saying goes, you would have to live under a rock to not know of some latest headline development. Once thoroughly informed, however, I would hope — undoubtedly like many people — that the top news would soon ‘go away’. Then I realized that certain stories need to be widely known and would not be unless major media flooded our consciousness with them. So, allow me to say that my latest book, ‘Lambs that will not be sacrificed’, should be required reading, at least for every person of adult age residing in the United States of America. Alas, it is not and never will be. In fact, as a nonfiction, somewhat technical prose, the publication will not have mass appeal. Yet, it is the story of millions of people including both average Americans and noncitizen U.S. residents. Ironically, reading our story benefits the reader as much as us, the metaphorical lambs that will not be sacrificed. It is a truth with which the whole world should be bombarded. Impunity flourishes when we turn our heads away from such critically important, albeit troubling concerns.”

America United International (AUI) is the leading campaign for “persecution victims lawfully evoking U.S. compliance with its International Covenant on Civil and Political Rights” in accord with the subtitle of Crenshaw-Logal’s book. All net proceeds from its sales will be used to help support AUI. “Lambs that will not be sacrificed” details much of the campaign’s history, current efforts, dynamic leadership, unrivaled success, and tremendous future. Find it on Amazon.com

U.S. Promoter of Foreign Cryptocurrency Companies Sentenced to 60 Months in Prison for His Role in Multi-Million Dollar Securities Fraud Scheme